Photos of the Day. 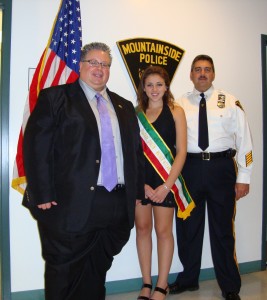 Queen of the 2013 Columbus Day Parades, 17 year old Nicole Attanasio of Mountainside, NJ, is the daughter of IAPSNJ executive board member Lt. Allan Attanasio of the Mountainside Police Department. She attends Governor Livingston High School in Berkeley Heights, NJ where she is an active member of several clubs including Italian and Art. She is in her fourth year of Italian language studies and is a member of the National Honor Society. She is a letter holder from the high school swim team and works as a lifeguard at Mountainside’s community pool. Her hobbies include swimming and traveling. 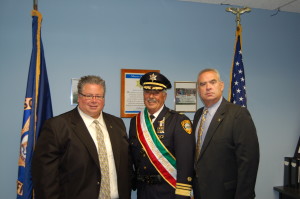 A lifelong resident of Somerset County who resides in the Borough of Raritan with his wife Lou Ann.  Sheriff Provenzano joined Bridgewater Township Police Department in 1968 and retired in 2001 as Captain of the Administration Division.  As a member of Bridgewater Police he has seen all aspects of police work from road patrol to working under-cover assignments in the detective bureau and the Commander of Emergency Service Division, which included, SCUBA, Heavy Rescue and Haz-Mat.  He was an assistant coordinator for the Somerset County Emergency Response Team, hostage negotiations unit.  He is a graduate of 2002 National Sheriffs’ Institute Executive Development Program, sponsored by the National Sheriffs’ Association and the National Institute of Corrections.

Marchers should assemble at the corner of Newark Avenue & Merseles St. in downtown Jersey City at Noon.

Monday, October 14th NYC Columbus Day Parade
Marchers and police vehicles should meet at the Port Authority Police Administration Bldg at 500 Boulevard East, Weehawken, NJ at 8:30am  Sharp in department uniform or business attire.  Breakfast will be available and personal cars can be parked at the PAPD until we return.  Car pooling is encouraged as parking is limited at the PAPD administration lot.
Family members are more than welcome to march with us dressed in smart attire.  No sweats of jeans please as the parade is shown live in WNBC Channel 4 NYC

All vehicles must be approved prior to parade day.
After the parade we will be joining the NYPD Columbia Association for lunch.  It is a nice opportunity to share a meal together to celebrate the holiday.