On February 7th 2015 the Executive Board of the Italian American Police Society of New Jersey unanimously sponsored an Executive Board Resolution in support of Assembly Bill A-4105 sponsored by Assemblyman Carmelo Garcia. This bill would enact the “Melvin Santiago Law” which would expand the supervision and registration of armed security officers in NJ. This proposed legislation would also require them to wear level 3 or greater protection holsters when carrying a firearm in the performance of their duties. This law is in honor of Jersey City Police Detective Melvin Santiago who was killed in the line of duty while responding to an armed robbery in Jersey City. 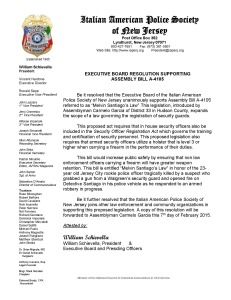